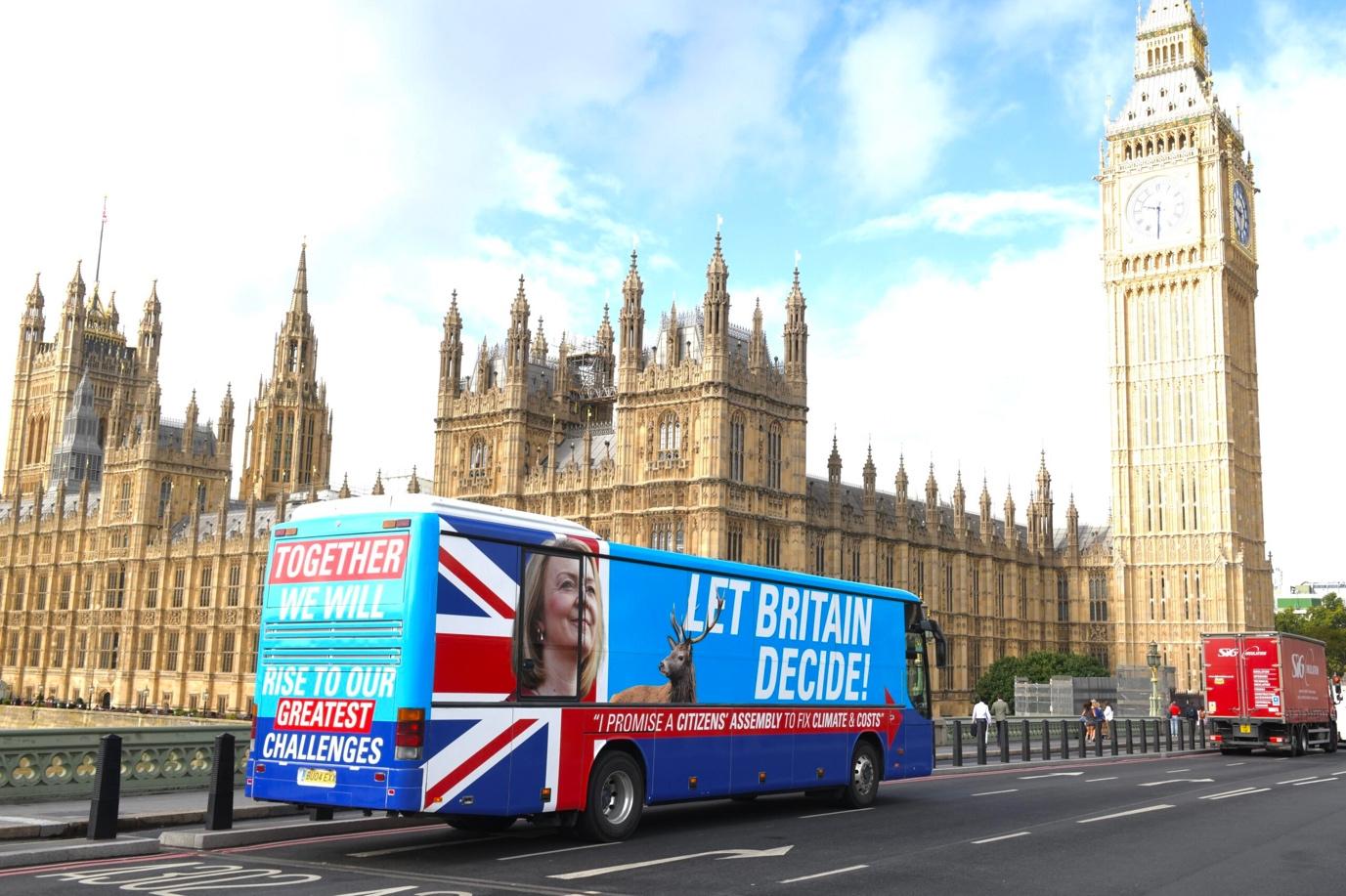 The period of national mourning following the death of the Queen necessitated replanning of the Rebellion Bus tours. Brighton along with other XR groups in the South was due to host the bus during the first week of the tours. Those postponed visits have been reorganised into a new tour starting on October 17th after the Weekend of Resistance. The date on which we can expect the bus in Brighton will be announced later this week.

So the hard work and detailed planning put in by the dedicated team of Brighton rebels will not be wasted but more volunteers are needed to organise the visit. Keep an eye on XRB Telegram channels for an announcement when the date is known.

The air on North Street is toxic. Continuous monitoring reveals a level of pollution, in particular nitrous oxide (NO2), far in excess of the maximum level recommended by the World Health Organisation. Nitrous Oxide is a cause and an aggravating factor of not only respiratory diseases but also heart diseases, dementia and stunted lung development in unborn babies. Brighton & Hove Council are drafting a new Air Quality Action Plan in an attempt to control the level of pollution produced mainly by motor vehicles. 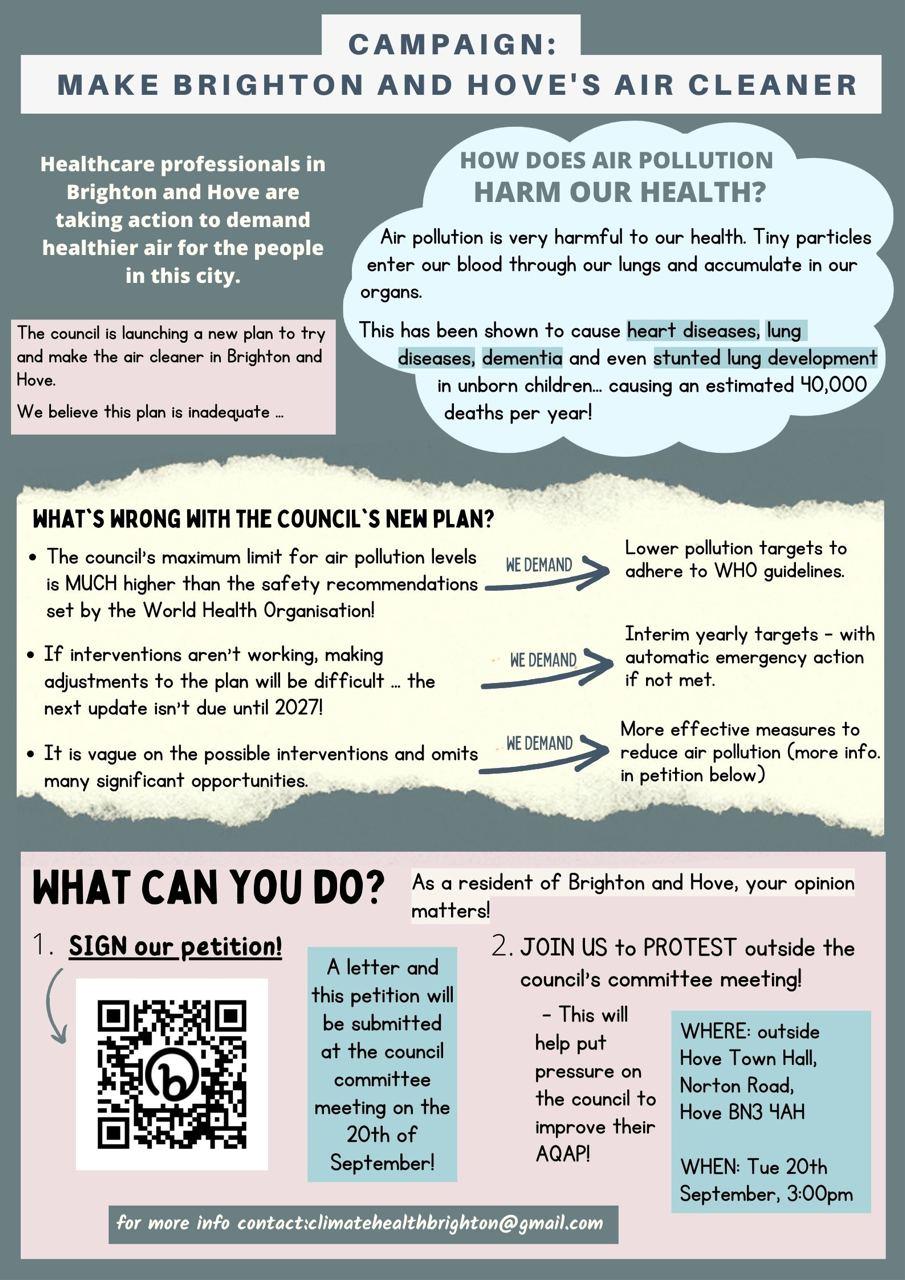 There is a similar dedicated petition for local health professionals that will be presented along with personal letters to members of the Transport, Environment and Sustainability Committee who will decide on the new AQAP.

On 20th September XR Brighton Health and other concerned local organisations will hold an outreach gathering distributing flyers about the petition before presenting a deputation to the committee.

Come and join us at 3.00 pm on Tuesday September 20th at Norton Road entrance to Hove Town Hall.

The Fossil Fuel Bank Action group continue to protest at Barclays’ massive funding of the fossil fuel industry with regular demonstrations outside, and sometimes inside, the bank’s premises on North Street. Although Barclays is Europe’s largest fossil fuel financer HSBC, another British bank, is a similar offender. The campaigning group walk between the premises of the two banks alerting members of the public to the destructive investments the banks make with depositers’ money.

The next demonstration will be on Monday 26th September 11.00 am on North Street.

The National Trust banks with Barclays. Members are urged to support a resolution at the forthcoming AGM that the Trust cease to bank with Barclays. The full text and voting procedure are in the recently received voting pack.

Oldhouse Warren consists of 550 acres of ancient Woodland near Crawley under threat from Center Parcs who want to build a holiday town of 900 lodges and big visitor attractions. A Mass Trespass is planned for 24th September in conjunction with Right to Roam and Landscapes of Freedom organisations to show opposition to destroying our local biodiversity in this fabulous old forest. 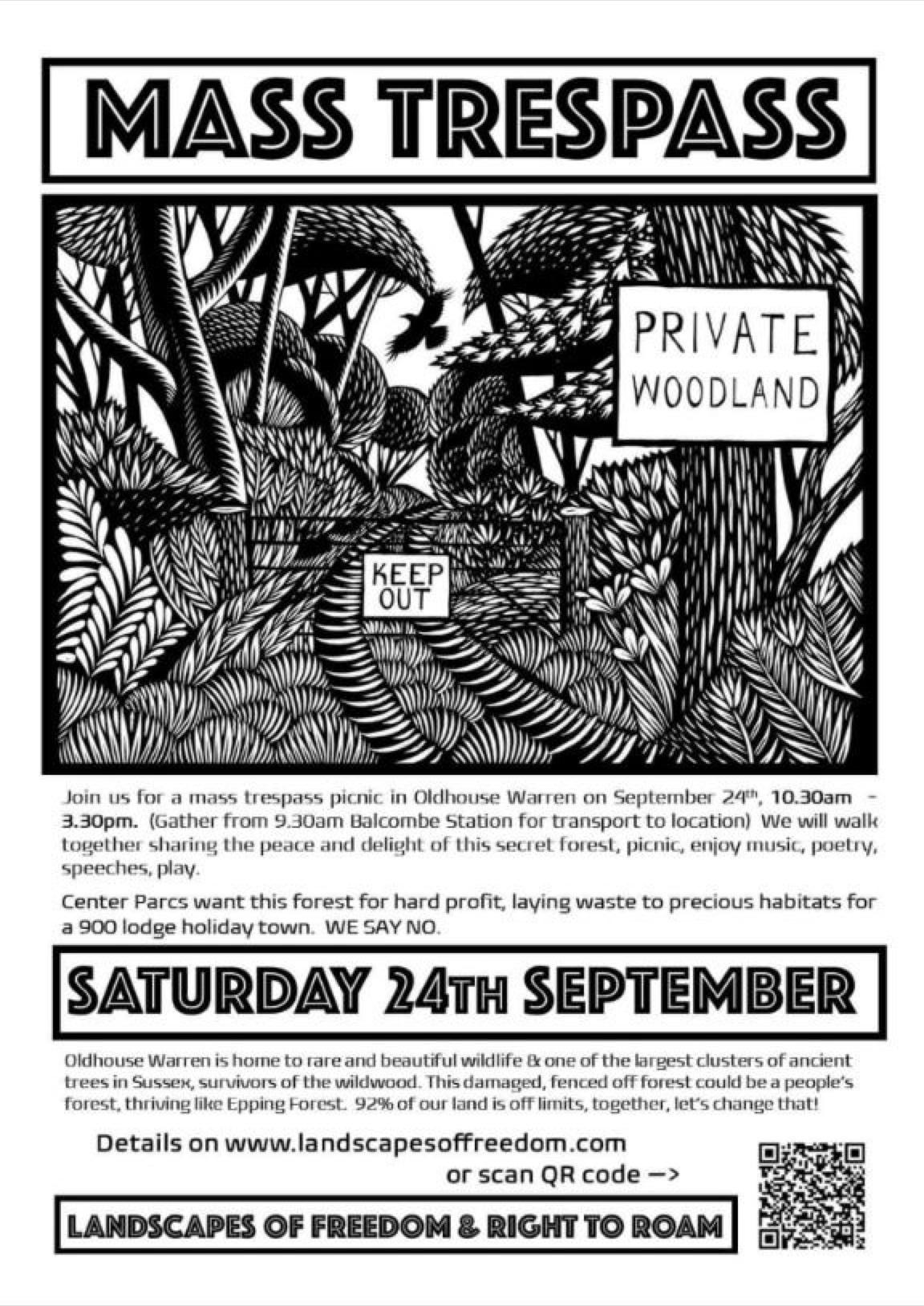 To register for the trespass: https://tinyurl.com/2nkmlzx6

Plan to be at Balcombe Station from 9.30am onwards for a car & minibus ferry to the gathering place.

This action was postponed from September 17th because of the planned rail strike. Note the new date - Saturday 24th September 10.30 am to 3.30 pm 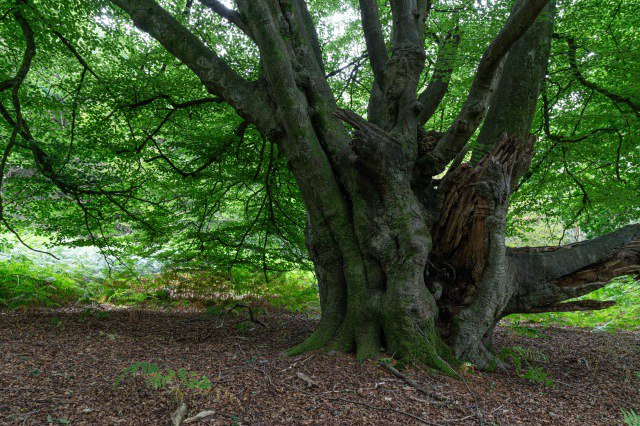 The Festival of Resistance has not been lost. XR’s contribution to the anti-Government protests that will fill the month of October will be on Friday 14th October in Whitehall – details to come in a Rebellion Broadcast. It will be followed by two days of peaceful collective celebration in London with talks, presentations, music, food, a march and regeneration including much rescued from the plans for the Festival of Resistance. So save the dates: October 14-16.

The next meeting will be on Sunday 25th September.

Our next meeting will be on Friday 23rd September at 7.00 pm.